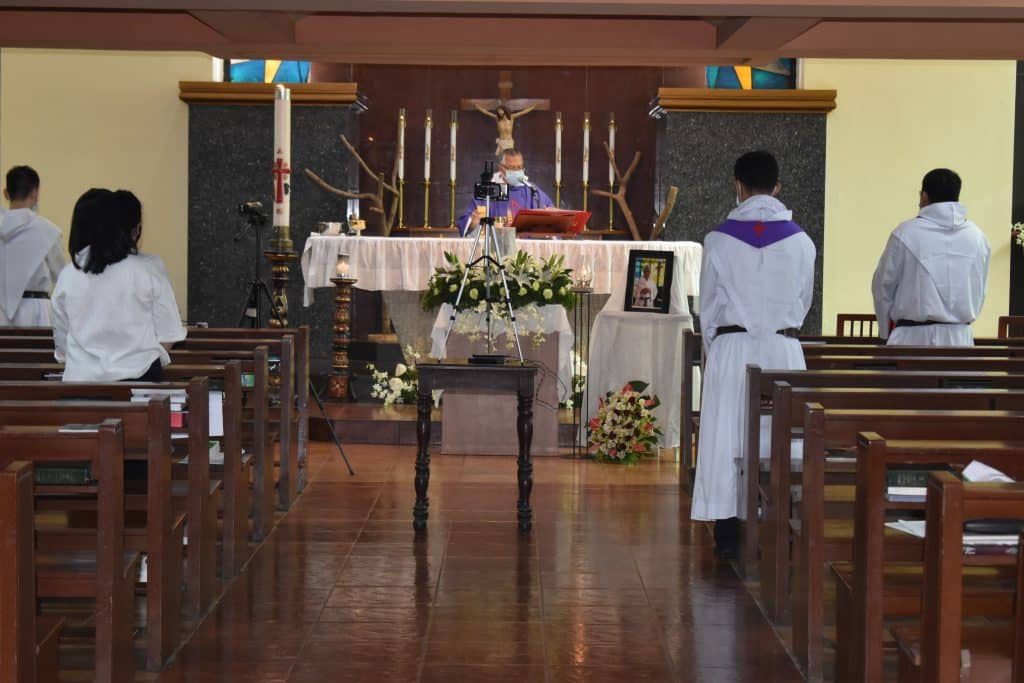 Pursuant to the strict quarantine protocols mandated by the government to avoid contamination and the spread of the virus, no wake was held in honor of the deceased. Instead, his mortal remains were cremated immediately a day following his death.

On September 15, 2020, Feast of Our Lady of Sorrows, the urn containing his mortal remains was brought to the St. Thomas of Villanova Chapel of the Recoletos Formation Center (RFC) for a solemn Requiem Mass.  Fr. Ian Espartero, OAR, Vicar Provincial reading a portion from the prepared eulogy written by Fr. Ernil Almayo, the provincial secretary, states, “During these years, Father Emil, as a religious, has been very observant of the common life. He valued silence, togetherness with the brothers during recreation, and punctuality in the performance of his duties, particularly prayers in common. He kept his special devotions to Our Lady and the Sacred Heart. As a priest, he was disposed to do ministerial works wherever the proper authority sends him, much like his personal patron saint, St. John Marie Vianney. It was only in these later years that, because of physical illnesses, he was not given much work. Since 2018, the deacon assigned in the community has been designated to accompany him in his apostolate.”

The solemn Requiem Mass was presided by Fr. Lauro V. Larlar, OAR, prior of the RFC community and cousin of the deceased. In his homily, he invited the community to reflect on the events that transpired during the last days of Fr. Emil. He pointed out, “Notice that he died on Sunday, on the day of the resurrection of the Lord – the day we recognize that Jesus is alive; that his death is followed by the Exultation of the Cross, and that to.day, we celebrate the Feast of our Mother as Our Lady of Sorrows. We are supposed to start with sorrow, with pain because of sickness, but then, from sickness, suffering, passion, we get to be crucified and die, only to resurrect.”

The said solemn Requiem Mass for the late Fr. Emilio Larlar, OAR, was attended by the whole RFC community, together with a handful of close relatives. After the Mass, the urn was deposited in the columbarium of Our Lady of Consolation Parish at 81 Alondras St., Miranila Homes, Brgy. Pasong Tamo, Quezon City.

At the time of his death, Fr. Emilio Larlar, OAR, was 80 years old, 59 years of which was spent in the religious life and 55 years as a priest.

In observance of the quarantine guidelines, the St. Ezekiel Moreno Provincial Center (Recoletos de Provincialate) being the community of the late Fr. Emil, has declared a total lockdown.